Normal forgetting or is it the dreaded Alzheimer’s disease? How can you tell the difference?

Currently, 40 per cent of people age 65+ experience some form of memory loss. If no medical condition is found, then it’s classified as “age-associated memory impairment.” And such forgetting is considered a part of the normal aging process. 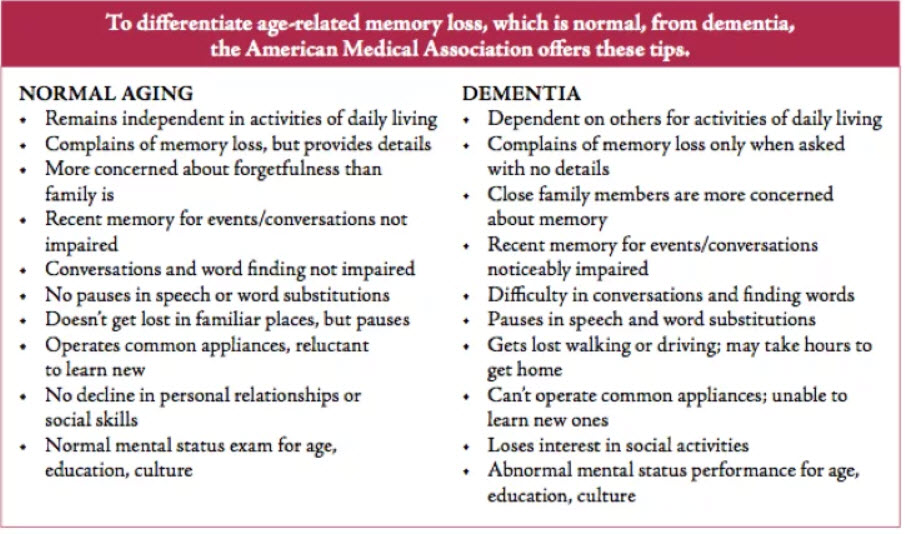 Forgetting things, names, places, as we age is normal. But, it’s the nature of the forgetting that tells you the status of the individual. For example, if you’re not able to remember a conversation from several months ago, that’s normal.

So is forgetting the name of a friend you haven’t seen for awhile.

If  you forget things and events occasionally, that’s okay.

Or, in a conversation, a word or phrase could be on the tip of your tongue, but you never get it out.

On the other hand, in Alzheimer’s disease, the symptoms are more pronounced and constant. For one thing, short-term memory is greatly impaired. The person is unable to remember most recent conversations or details.

The person can’t remember the names of family members .

And, in a most telling sign, your family is worried about your memory, but you’re not.

The Alzheimer’s Association has developed a list of symptoms that are characteristics for early onset-dementia. Here are some behaviors you should be aware of and that may indicate it’s not just normal forgetting.

One of the most common signs of Alzheimer’s, especially in the early stages, is forgetting recently learned information. Others include forgetting important dates or events.  Most alarming, the person keeps asking you for the same information over and over.

Another habit is using constant reminder notes for things they previously handled just by relying on their memory.

Cognitive decline is a major symptom of Alzheimer’s, and manifests itself when the person has trouble just carrying out daily chores. For example, it now takes them much longer to do things than they did before.

Work schedules both at home and at work become disorganized and haphazard. Deadlines are missed and projects are delayed and disjointed.

In general, the person has difficulty completing familiar tasks. Spatial orientation declines and places that were once familiar are no longer recognized.

People with early onset-alzheimer’s have trouble understanding and interpreting visual images. For example, they
may have difficulty reading, judging distance, and recognizing  color or contrast.

They also display difficulty with words and naming things incorrectly.  For example, they may call things by the wrong name, such as calling a watch a hand clock.

As the disease progresses, they withdraw from work and social activities.

A person with Alzheimer’s gradually remove themselves from hobbies, social activities, and work projects. They have trouble keeping up with daily events and consequently avoid social interjections because they can no longer handle it.